Kelli Shay gave me a call over the weekend to ask if we would be interested in projecting for these live bands she had booked at the Nashville art space, Little Hamilton. Of course I said yes, and as usual with no consulting my partner. To be asked by such talented artists to assist in augmenting an artistic performance is  a very gratifying sensation which, if taken seriously, can completely alter the performance and elevate the propensity for full effect. The audience is also often engaging and stimulated and vocal, as was the case this evening. The reception was incredible, again....
The previous screenings, albeit successful, culminated on this showing. It was the most last-minute one yet, but one for which my partner and I were well prepared. On this occasion, Alcamy played the initial set of composite film images for both Ben and Kelli's sets, while perpendicular to those images, I screened segments of more known films and some rare Chris Marker early VHS projects. I also played a really psychedelic Wim Wenders short, "Ten Miles to Trona," off of the very interesting project reproached from the 1978 original in 2002 in two 10-film projects titled "Trumpet: Ten Minutes Older," the other film set simultaneously released was "Cello: Ten Minutes Older." Incredible short films there.
It was a great success. Some great hosting was done, particularly by those at Little Hamilton, Dave I believe it was. But, we had a ton of fun, got some great film in front of some great people, and all the while, got some projects out there of ours while instigating new collaborations.
The folks of Sons of an Illustrious Father were very talented and open young people, loving their travels and playing music that seems to me to have been very emotionally cathartic. Best of luck to them, as I hope they've had a safe return, and thanks to everyone for the wonderful comments and questions, namely Scott Zeman of Vanderbilt University and Holly, whose comments are never taken lightly. Lastly, thanks to the great performers Marcantels and Kyle and Kelli Shay, thanks for the invite!!!!
Below are some stills from Chris Marker's "2084," which insitigated a lot of questions and comments...a great work of Marker's VHS output! 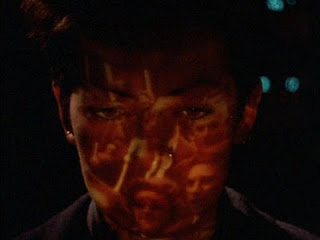 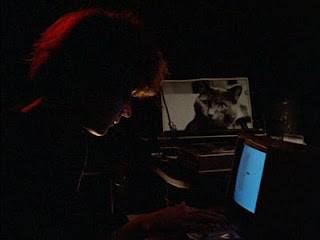