After mentioning it twice between us, ASPHH and I decided to take over an unoccupied apartment in her building for a couple of hours on Friday, the 7th of May. We sent out close to twenty-five emails at three pm, followed by another dozen or so text messages, giving eveyone five hours to react. The exhibition was therein scheduled that evening from seven until nine, followed by a film screening across the hall at a properly occupied apartment.
The works displayed were paintings, drawings, photographs, plaster molds, and other works on paper, glass, and chalkboard. During the exhibition, Aleksandr Medvedkin's Happiness played on a wall while the sound art disc, part of Stockholm-based Styx Forlag's Autistisk Skilskrift publication provided the soundtrack. This audio addition was originally released in 2006 as supplement to the book of the same title, and features, among other artists, works by Leif Elggren, Sten Hanson, CM Lundberg.
Due to the process of presenting these works, and the place in which it was executed, there were many unexpected, unforeseeable, and palpable though intangible authors and attendees, in the curatorial and viewing processes. The time constraint certainly had great effect on the exhibition as a majority of the work shown did not arrive until just ten before seven. The space constraint of hauling the audio/visual equipment and art work in a compact sedan; the effect of viewing art for a short window of time in an unoccupied apartment in which none had permission to be, all had significant authorship and presence in the show. These presences, these constraints, were of immense help, across the board.
The constraints mentioned in getting the work to the apartment are self-descriptive. It's hand was apparent in the selection process of the curation. The time constraint followed a similar trajectory, but to a lesser extent as the two respective collections from which we culled the exhibit, containing original works by artists, almost all still living and working in San Francisco, Nashville, New York, Stockholm, and Los Angeles, are housed in three locations central to the room we temporarily inhabited for the exhibit. Of course, with further planning, plenty of other works could have been requested, reclaimed, or created for the show, but the required intentionality for this exhibit to have happened did not extend to that possible function, it is out of scope. The need and desire met, were equal, and as the progenative wave, the monad made another equal, another palpable, intangible third whose presence was of substantial breadth to provide the necessary force to assert itself. 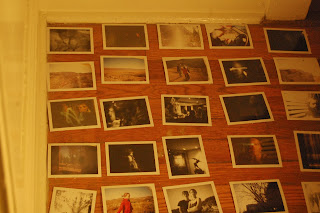 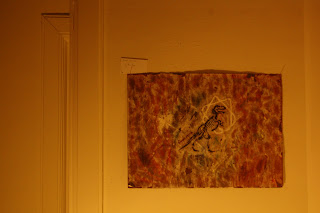