Nashville band, LYLAS, in conjunction with puppeteer and puppet-maker, Adrian Rose (of the Nashville Public Library's Wishing Chair Productions and the Mechanical Animals Puppet Caravan) presents the premiere of their musical shadow puppet piece, The Singing Shadow. Through live music, live action, and the magic of shadow puppetry, the piece tells the story of The Singing Shadow, a wayward creature of the night who stumbles into Halloween, where he encounters a world of bizarre creatures led by the stately Miss Halloween.
The Singing Shadow is a 15 minute piece and incorporates live music written and performed by longtime Nashville band, LYLAS, and video animation by local filmmakers Ben Marcantel and Kelli Shay Hix. The show is recommended for adults and for children over 7 years of age and will be followed by a question and answer session and a short chat on shadow puppetry and its history. The entire program is scheduled for 45 minutes.

Kyle Hamlett composed the music for, and performs in, LYLAS present The Singing Shadow. A musician and songwriter Hamlett founded the musical project LYLAS over ten years ago. LYLAS morphed over the years into an amorphous musical project, utilizing a rotating cast of some of the finest musicians living in Nashville and incorporating a vast array of instrumentation from cello and violin to theramin, pedal steel, and the singing saw.
Adrian Rose is the primary puppeteer and puppet-maker for the show. For the past five years, she has worked as puppeteer and puppet-maker for Nashville's Wishing Chair Productions at the Nashville Public Library. Adrian has built puppets for companies including Dollywood and BriAnimations, and performed with the Nashville Symphony's production of Peter and the Wolf. In 2007, she founded the puppet company, Mechanical Animals Puppet Caravan.
View a video trailer of the piece!
Find Zeitgeist on Facebook
Ben Marcantel created the video effects for the performance. Marcantel is one of the founders of the Nashville musical collective, Forrest Bride (named one of the top 10 bands to watch 2010 for by the Scene), and has created numerous short videos and music videos for bands including Hands Off Cuba, William Tyler, and LYLAS.
Kelli Shay Hix is animator, screenplay writer, and violinist for LYLAS present The Singing Shadow. Hix is also a solo musician and member of several bands in Nashville, including LYLAS and the Forrest Bride Collective, and maker of visual art and short films.
There will be a suggested donation for the troupe. 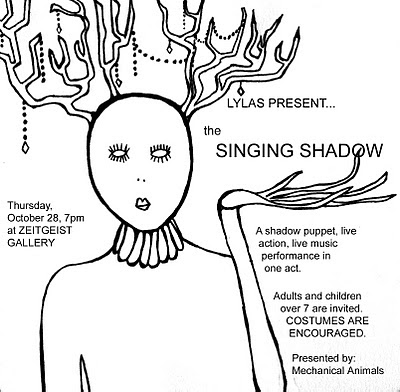